Do you have children who want to keep busy while you are on vacation?
These all inclusive resorts will keep them busy with their water parks and slides!

Set on 500 acres on the south coast, Coconut Bay Beach Resort & Spa has amenities that appeal to all types of sun-seeking water lovers. Singles and couples can channel a grown-up vibe at the adults-only Harmony wing, which offers sunning and frozen-cocktail sipping at two pools. Families, on the other hand, can make a splash (literally) in the kid-friendly wing called Splash and its Cocoland Waterpark, which features a 1,500-foot Lazy River complete with drenching waterfalls and waterslides like the exhilarating Coconut Canon.

Moon Palace Golf & Spa Resort , it has a mini racetrack, a beauty salon/runway room for fashion shows, an art room, and an arcade, among many other amenities just for the kids. Outside, there’s also a kids water park with large slides and a Flowrider machine
Grand Bahia Principe Coba  – This lagoon-like water park is made up of what looks like large boulders and funky houses. Multiple water slides cascade down the park into the shallow water toward colourful statues of sharks, elephants, and frogs.
Grand Palladium Colonial Resort & Spa has a kids waterpark
Grand Palladium Costa Mujeres has a  kids waterpark
Royalton Riviera Cancun Resort & Spa has an enormous on-site splash park, supervised kid’s and teen’s clubs
Royal Solaris Cancun. The water park is designed to represent Noah’s Ark. The shallow pool is filled with an ark, five slides, and lots of large animal statues.
Crown Paradise Club Cancun the water park adventure area which has two large serpentine water slides that land in a medium-sized pool. This area is also home to a rock climbing wall and zip-lines. The other water park is for younger children and has a pirate ship and medieval castle theme
Gran Caribe Resort Cancun has a pirate-themed water park, though it’s far more structurally similar to a real ship. The Pirate Splash Park is made up of a pirate ship, a medieval castle, seven water slides, and two splash zones

Grand Sirenis Punta Cana The large Sirenis Aquagames water park is available for clients staying in the hotel, and is a unique water park in the area, due to its extension and incredible rides and attractions.
Nickelodeon Punta Cana Enjoy winding water slides, splash pads, spray grounds and a lazy river ride. Join the fun with a Splash Mob inspired by Nickelodeon’s iconic game shows and characters

Allegro Cozumel  is a family-friendly resort with a fun pirate-themed water park. 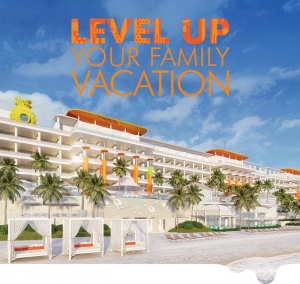 FAMILIES FIRST
with Nick-ified suites- all designed for families of five (including two bathrooms!) and an exciting blend of kid-friendly activities including Splash Mobs & Nick Live! Poolside, adult amenities and World-Class Gourmet Inclusive® experiences designed to spark five-star fun to everyone. 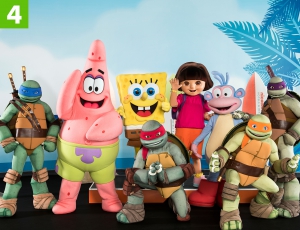 ONE-OF-A-KIND EXPERIENCES
including Nickelodeon Place™ at the heart of Aqua Nick® with lively and immersive interactions with 20 characters, including the Teenage Mutant Ninja Turtles, SpongeBob SquarePants, Dora the Explorer and other fan-favorites. Plus, new experiences like Slime Time Live! – perfect for the whole family, and even a Big Orange Couch in SNICK Lounge. 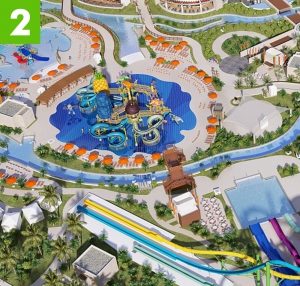 AQUA NICK®
one of Mexico’s largest water attractions with 6 acres including 700 meters of slides, two themed river rides, splash pads, a beach and activities designed for all ages with Nick surprises and characters along the way. Unlimited entry is included with your resort stay, along with exclusive early access. 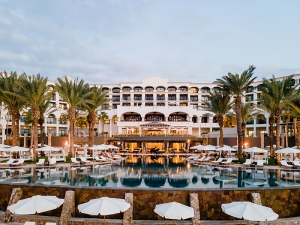 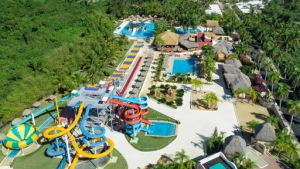 Dominican Republic
This renovated resort boasts a very elegant and seductive design. Enjoy a unique holiday in our Caribbean Paradise surrounded by an explosion of colour and beautiful nature.
Grand Sirenis Punta Cana Resort is made up of two hotels, Grand Sirenis Cocotal Beach Resort and Grand Sirenis Tropical Suites. This spectacular five star resort is situated in one of the most beautiful coconut groves in Punta Cana; set in a privileged position, the Grand Sirenis Punta Cana Resort offers activities for all ages, whether for families, couples or groups of friends.
Designed to provide the best service to its guests, the hotel offers 2 pools for adults with beach-style access, 2 separate pools for children, sun terraces…
You will also enjoy our themed restaurants, making your holiday one of the most delicious and unforgettable you have ever had. Grand Sirenis Punta Cana Resort has seven à la carte restaurants offering our guests the best specialities in gastronomy. In addition to the current range of cuisine, the new Tex-Mex “El Rancho” and French “Le Relais Gourmand” restaurants will surprise you with their sophisticated decoration.
Discover the excellent services and facilities of our 5 star hotel in Punta Cana. Discover our welcoming new spa area with double and individual rooms, or relax in our swimming pools. If you are looking for fun for the whole family, the Sirenis Aquagames waterpark offers excitement for adults and children. 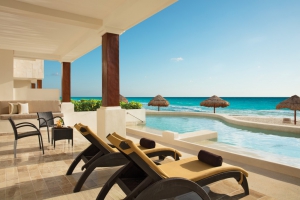 Opened March, 2020
This all-new Now Resort & Spa features well-appointed rooms and a variety of Unlimited-Luxury® offerings, including:
Nature elements around the resort, including an exotic fish pond
Cenote-inspired Now Spa by Pevonia®, offering guests the ability to pamper themselves with a variety of luxurious offerings
The Explorer’s Club for Kids, featuring activities for children ages 3 to 12 supervised by Red Cross certified staff, offering programs with different activities based on science, nature and exploration.
The Core Zone Teens Club, a two-story entertainment center for teens ages 13-17, featuring daily activities and a vast array of sports and games for teenagers, including a variety of board games, video games and activities
Six bar options offering top-shelf brand domestic and international top-shelf spirits, including non-alcoholic bars for teens
Seven restaurant options ranging from kid-friendly to adults-only with options including kid-friendly menus, buffets, international à la carte restaurants, grilled snacks, a café and an ice cream parlor
A main infinity pool, activities pool and adults-only pool
We are also excited to share the following amenities are coming in April 2020:
Water park, including a children’s splash pool, lazy river, a waterslide and a Rollglider aerial ride
Tennis court Located on a lively beach in Cabo San Lucas, this all-inclusive resort offers guests six restaurants, 10 bars and six pools, one of which is an infinity pool with swim-up bars and a view of the ocean. Kids will love the kids club and on-site water park with slides. Free Wi-Fi available for all guests. Debuting December 2019!
The Newest All-Inclusive Experience by Hyatt, Built from the Sand Up…
750 Oceanview Suites | 12 Restaurants | 14 Bars
14,000 sq. ft. Fitness Center | Larimar Spa | Canopolis Waterpark
All-inclusive luxury has been redefined with a brand-new resort built from the ground up in the most exclusive
area of The Dominican Republic. Inspired by the beauty and culture of the destination, ocean views are visible
throughout the meandering resort from the stunning lobby to the contemporary accommodations. Swim-up
suites, inspired cuisine and a waterpark are just a few of the many delights awaiting guests of all ages at Hyatt
Ziva Cap Cana Costa Rica
RIU Hotels & Resorts has debuted its new Splash Water World at its sprawling resort complex in Costa Rica, home to the Riu Guanacaste and the Riu Palace Costa Rica.
Free for guests to enjoy, the new water park boasts five slides of varying speeds including the four-lane Aquaracer and two body bowl tubes. There are also various games with jets and water pistols, plus pools with aquatic elements for small children.
Splash Water World is located at the entrance to the RIU Complex in Guanacaste, making it easily accessible to guests of both neighbouring hotels. The Riu Guanacaste, opened in 2009, is a five-star all-inclusive hotel situated on Matapalo beach. It has 700 fully equipped rooms, five restaurants, five bars and three pools. In 2012, RIU opened the elegant Riu Palace Costa Rica featuring over 500 rooms, five restaurants and seven bars. It shares common areas with Riu Guanacaste, including the casino, spa and various shops. Guests at both hotels have access to a private beach area and gardens. Located only a short walk away from one of the most pristine and beautiful stretches of Bavaro Beach, Grand Memories Splash is perfectly situated in a lush tropical setting, offering a new concept in all-inclusive resorts with unparalleled service and deluxe accommodations that perfectly fit into the genuine and magical ambiance of the Caribbean coast. This resort offers the savvy traveller access to a beautiful beach, golden sand, and an abundance of accommodation options with high-quality amenities. Grand Memories Splash caters to both couples’ and families’ unique vacation needs. With diverse dining options, indulge in the romance of the Mediterranean at the resort’s Italian à la carte restaurant, which offers the perfect ambiance for special occasions and celebrations, or embark on a thrilling seafood adventure at the popular restaurant ‘Under The Sea’.